Should you wander through the Tapa lobby of the Hilton Hawaiian Village Waikiki Beach Resort in Waikiki, you’ll find a life-size bronze statue honoring the legendary Hawaiian romantic baritone, Alfred Aholo Apaka. During the statue’s dedication in 1997, long-time family friend and great Hawaiian teacher, the late Gladys Brandt said, “His ability to render a Hawaiian melody was unduplicated for the time, and perhaps forever.”

Before Don Ho there was Alfred Apaka, The Golden Voice of Hawai`i. During the 1940’s and 1950’s, Apaka was Hawaii’s most famous entertainer and his show was a “must see” for all island visitors. Apaka was indeed the most influential local performer of his time, setting the standard for all modern Hawaiian music. His voice, masculine good looks and personality truly helped put industrialist-developer Henry Kaiser’s Hawaiian Village Hotel on the map. George Kanahele, a critical observer of Hawaiian music later wrote, “Alfred Apaka possessed one of the most remarkable voices to ever come out of Hawai`i.”

Born into a musical family, Alfred Apaka came from Hawaiian royalty. His great-aunt, Lydia Aholo, was a musician and educator and the hanai (adopted) daughter of another great Hawaiian musician, Queen Lydia Lili‘uokalani.

Apaka’s son, Jeff, also a fine musician, says of his father, “I like to think that dad’s musical training came in a direct line from the Queen.” Alfred Apaka’s father, Alfred Sr. was himself an accomplished musician and later recorded with his son for Capitol records.

Alfred’s obvious talent and public appeal eventually landed him a spot as a featured singer on the enormously popular syndicated radio program Hawaii Calls — and then came regular shows with the Moana Serenaders at Waikiki’s renown Moana Hotel. From the Moana, he moved to Don the Beachcomber’s where in 1952, Bob Hope “discovered” Alfred Apaka.

At home in Hawai`i, Apaka headlined the Tapa Room at Henry Kaiser’s Hawaiian Village which was constructed specifically for Apaka’s show.

As his fame and popularity spread, in 1957 and seating 800, one of the worlds first gold anodized aluminum geodesic domes was built to accommodate Apaka’s adoring crowds.

in 1960, with one rave appearance on the early syndicated TV production, All Star Review featuring every star in Hollywood including Milton Berle, Danny Thomas, Jimmy Durante, Martha Raye and George Jessel, Alfred Apaka was planning his own national television special when he was struck down by a sudden heart attack at the age of forty. The Golden Voice of Hawai`i was silenced forever.

Alfred Aholo Apaka is interred at Diamond Head Memorial Park in Honolulu. The words on the engraved epitaph are from one of Apaka’s most beloved songs, Here in This Enchanted Place which was adapted from the aria ”Caro Noma” from Verdi’s Rigoletto.

Here, in this enchanted place
Here, for all eternity
Here is where I want to be 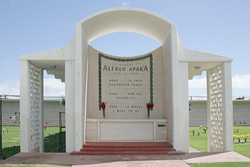 In 1997, Alfred Apaka was honored by a posthumous Nā Hōkū Hanohano Lifetime Achievement Award (Hawaii’s “Grammy” award) and in 1999 with a “new” album, The Lost Recordings of Hawai‘i’s Golden Voice.

As yet another testament to the significance of his music, 21 Alfred Apaka albums are hear on the radio and are available on Itunes and Amazon.com — nearly 60 years after his passing.

Hawaii’s This Week Magazine publisher Ron Cruger wrote, “Because Hawaii is a land far removed from all others, the most distant populated place on earth, the people of Hawaii hold on to their traditions – their history – dreams. The splendid voice of Alfred Apaka remains in the memories of the Hawaiians. His magical voice filled the sweet Hawaiian air with thoughts of love and dreams of what could be. When Apaka sang a hush fell over those listening. Most had never heard such beauty weave through the air. It was romantic and strong. It made you dream. Hawaiians hold close to their hearts the feelings and the sounds of Alfred Apaka’s music.”

Son Jeff Apaka noted, “Somehow, the romantic hapa haole music of Hawaii’s golden era of entertainment that once captivated and enthralled the world has been lost. My great hope is that the music my father once sang – the classic music that exemplified Aloha, that set Hawai`i apart from the rest of the world and attracted so many to visit – will someday be heard again in the now empty showrooms on ‘the Golden Mile’ in Waikiki.”