In 2000, the Stewards of Waimea Valley began the long fight against the development of Waimea Valley for private use. See and hear the Valley’s kupuna and others relate the history of Waimea Valley and how the community organizing effort began HERE. NOTE: This video was digitized using an old VHS master and we’re fortunate to have it because several Waimea Valley kupuna have since passed.

Scott’s community organizing efforts initially culminated when the County of Honolulu condemned the property for a City Park. Scott said, “We thought the Valley was finally safe but the long saga continued until 2005 when the new Honolulu Mayor Mufi Hannemann proposed subdividing and selling a major portion of the the hallowed Valley.” Scott again “rallied the troops” and literally hundreds showed up en masse at a Honolulu City Council meeting and an earlier 5-4 vote for development was reversed. 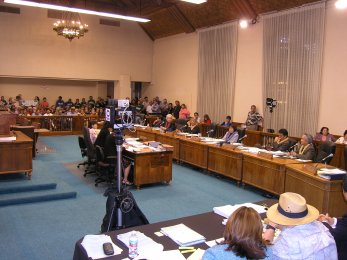 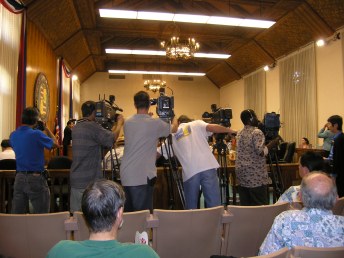 Turning five council votes against the mayor’s development proposal in but a matter of days was later described as “unprecedented.” Soon after, $15 million was raised by a consortium of environmental organizations, the Hawaii Trust For Public Land and City, State and U.S. government entities including the U.S. Army. In 2006, title to the sacred ahupua`a (a pie-shaped geopolitical area of an island extending from the mountain top to the ocean) passed into the hands of the Office of Hawaiian Affairs. Scott said,

“Saving Waimea Valley from the developers took over five years and could never have happened had we not engaged the public via the media. By the time it was over, I had lost count of the local headline news and international media stories. ‘Beating city hall’ and rapacious developers can be done.”